That’s what I do: I write the lyrics for jazz songs.

This is the story of one of them. 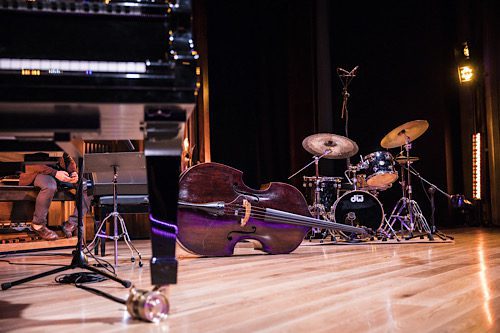 First, I like to start with some kind of design brief.

Sammy Cahn, when asked that perennial chestnut about whether it was the words or music came first, said it was "the 'phone call".

Admittedly, I get fewer calls than Cahn, but I still need a place to start and some idea of where I'm headed. The journey getting there, more sweat than inspiration in my case, depends on having some kind of route map. And the "call" - when it comes - is where you get the first directions.

Cahn's 'phone call is what I call a design brief.

I never seem to get very far without one.

For the song at hand, the call came from Pat Coleman, the producer of a CD project I was planning, suggesting we write something new together. For my part as lyricist, the design brief then became defined in large part by the sound and structure of the music he subsequently delivered, as well as by the vision of stylistic landscapes that it presented.

Design Brief - Getting Down with the Detail

With the blueprint so far only the merest sketch, the next step involved laying out the structure in finer detail as part of developing an effective working intimacy with the music.

I had a lead sheet - always useful if not essential - but I aim to be able to run it at will inside the tiny 8-track studio of my imagination. I have to make it mine. To know it is to own it. I need to get it inside my head like the unshakable memory of a lover.

Getting familiar like this lets me do two important things: it allows me to identify points of particular individual significance about the tune, and it enables me to find some points of access for eventually working my way into the verbals.

The things I found significant about this tune were the bridge section, the hook placement, and a special little pivot point that occurs in the middle of each 8 bar section and leads into a temporary Major 7th colour before returning to the ruling minor tonality.

Finding a Way In - Breaking & Entry with a Monster

With a more complete blueprint, a deeper understanding of the finer design details in the architecture, and the joint well cased, so to speak, I started rattling around outside like a burglar, testing windows and door-handles, looking for some yielding points of entry.

And in this case, as with others, I gained first access through singing nonsense.

Lyricists in both France and Brasil call the process "making a monster".

It's a whole lot of fun and very useful. It consists of singing nonsense words and syllables to a melody so the right sounds come to naturally define the right notes in terms of their most appropriate degree of strength, rhythm and innate "singability".

And the really neat thing is, once you've written out your "monster", that you not only have a pretty precise definition of the shape of the sounds your words will have to make, but also, if you're lucky, it will offer up some half-decent phrases or images to start work with.

That's why Paul Simon adopted the method for Graceland.

Here's my "monster" for the first 8 bars of the tune:

Silly, isn't it? But here's what fell out of it for me:

And so now I had a way inside.

Lining Up the Ingredients and Putting It All Together

I had a Hook - and hence a Title: "Things Turn Out That Way" - but I also now had a good purchase on the structure of the sentiment inside the riddle of the song I was trying to lever myself into.

Each 8 bars would have an opening statement (I used to know blah blah.. ), then some kind of conjunction function at the pivot point (although/ however/ but...) followed by the brief bright Major 7th moment back into the embrace of the minor conclusion (guess what? - Shit happens).

And a rhyme scheme:

In the last 8 bar A section we get to the hook more directly, and without having to trouble with an intervening 4th line.

With recipe thus established, I used my access points to line up ingredients?

For the c rhyming at line 3, I made up a short list of similar conjunction-type constructs that could join two 4 bar ideas - although, I know, you know, who knows, and so, but no?

For the d rhyming at line 4, I assembled another list of suitable phrases to marry with the Hook: "Things Turn Out That Way"

"In the light of day

No matter what we say

At the close of play"

(I got a real kick out of "In the light of day" because of the way it sat so nicely on that brief bright Major 7th moment, and felt confident that - once established so happily in the first stanza - the other phrases would work to further the emotion.)

The toughest bit to hack my way through was finding good opening statements throughout at lines 1 & 2. Worked out in the end I had plenty left over, though - more than enough to satisfy my search for ways to extend the story for the obligatory repeat of the form.

It's common practice to repeat the complete form of a jazz ballad - it gives you 16 bars for the solo, and the vocalist brings the song back in again at the bridge. Works for anyone. Works for me. Except that I wanted to avoid that old regular predictable solution of merely repeating the lyrics.

So, having run out of any decent "although/know/so" rhyming sounds for the conjunction function at line 3, I chose "no way & they say" as replacement rhymes for the closing B and A sections after the solo, and just shuffled all the pieces around.

Some may find this all too disappointingly mechanistic - but I never have the time to just hang around waiting for the fickle muse to mysteriously turn up and kiss me with inspiration ? I always have to work at it.

And it is a pretty cool process that makes the finishing so easy.

Once I had all of these elements spread out before me it became a simple method of mix-and-match and cut-up assemblage until I found the happiest fit for the pattern.

You can hear a clip of my own rendering at:

Things Turn Out That Way

The clip reaches just as far as the top of the bridge - maybe enough to show the cute little turnaround that rises up to meet it - but I think it's enough to show the significance of the pivot point and how the atmosphere brightens immediately at that Major 7th moment.

A complete demo version (with a truly great session singer) is at:

Things Turn Out That Way

"I used to know what it's all about

Fly cute and low with the world figured out

In the light of day

Some folk deceive, or at least, so I've heard

No use denying it anymore

Excuse me crying - I've been here before

Matter what we say

Somehow it feels that it's getting late

Seen better deals but I guess they can wait

Maybe things turn out that way

So underhand. It ain't right. I ain't lyin'

At the close of play

Once I was cool, baby - not right now

Nobody's fool - not a lot, anyhow

Maybe things turn out that way"

Together with his song-writing collaborator, Pat Coleman, Colin Lazzerini is the owner of ‘Hip Pocket Music’, and two small independent specialist labels – first the decidedly jazzoid ‘RoadHouse’ and later a little singer-songwriter imprint called ‘Root Cellar’.  While Colin admits he fantasised some about the idea when he was younger, like lots of other kids, he never really seriously expected to have any career in music at all  – but just sort of drifted into it.  Almost as if dreams were magnetic.

Except for the occasional mistaken spotty teen-aged outing – it was actually not until he was approaching my thirtieth birthday in foreign parts that he embarked upon performance with earnest commitment and real intent.   Even then, a couple of busy decades slipped by between his first stumbling attempts at making original songs and his happy arrival at a truly satisfying level of craft-confidence and the ability to deliver professional goods.